I’ve been a dog lover as long as I can remember. One of my parents’ earliest home videos is of me tapping on the glass to our labrador retrievers outside, laughing every time they approached and begging for more.

But being a dog lover and really understanding them are not the same. I learned that from my time volunteering at the Lawrence Humane Society.

Back in 2016, fresh out of college, I was itching to adopt a dog of my own. After 18 years of always having a canine around the house, my new dog-unfriendly apartment was not ideal. So, I signed up for my first volunteer session at the Humane Society and quickly found my niche working on the behavior team. My soft spot is big, rambunctious dogs who don’t know their own size — and the behavior team had those special children in droves.

Little did I know that those dogs would be the best practice run for adopting my own dog, Dempsey, a year later.

Volunteering at the Humane Society is more than just a great way to give back to our animal community. It also actively teaches you how to be a better pet parent yourself. Take it from me; once you’ve worked with these animals long enough, you’re prepared for anything.

Here’s what I’ve learned in the last four years of volunteering — and how it helps me be a better dog mom every day.

1. Animals are not one-size-fits-all.

Just like people, every animal is different. Some need active, energetic households to be happy; others thrive with a comfy couch and a short walk every day. When you adopt, you need to think about how a dog will fit into your current lifestyle — and listen to the adoption counselors who know the animals best.

If you have children, you should think twice about adopting that rambunctious dog whose kennel card says “Best with older children.” Or, if your idea of an active Saturday means moving from the couch to the kitchen (no judgement!), a working dog like a shepherd may not be the right fit for you. Don’t try to force an animal to be something they’re not; think how you can adjust your lifestyle to fit them.

After seeing the adoptions that didn’t work out, I waited until I was 100% ready to provide the lifestyle my ideal dog would need.  Because my first apartment was a small studio, I made the hard (but right) choice to wait until I had moved out to get the kind of dog I wanted. Now, my bigger space, backyard, and dog-loving landlord are the perfect fit for my 65-pound mutt. 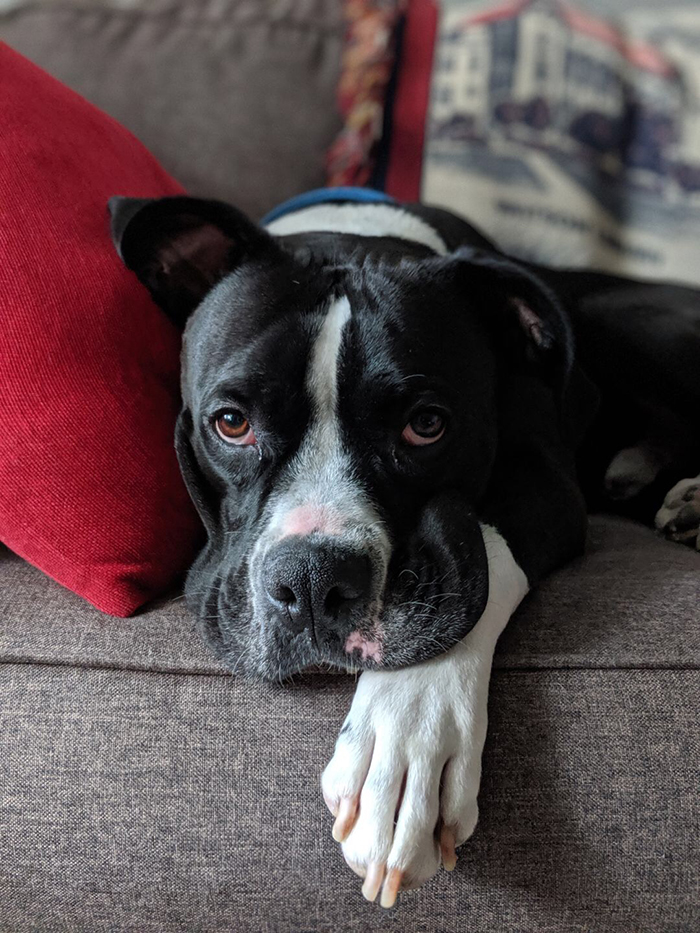 2. Breed characteristics are guidelines, not rules.

Many people have breed preferences when it comes to dogs, and that’s totally OK. But don’t expect a dog to have certain characteristics just because they “look” like the perfect golden retriever you had growing up.

Most shelter dogs have gaps in their personal background, and that includes their DNA. The shelter does not have the time or resources to DNA test every animal so it’s their best educated guess when an animal comes into their care. Take my boxer mix, Dempsey. It’s obvious he’s got a lot of boxer in him — but he’s also got some mystery breed that gives him his dark color and longer nose. Those mystery breed characteristics also present in other ways; he’s much lazier than any boxer I’ve had in the past, and he’s not great around children the way boxers are “expected” to be.

If I had adopted him expecting stereotypical boxer behavior, I would have been disappointed. But I also would have been searching shelters forever to find a dog that may not even exist! Expect the unexpected with your adopted dog, and embrace the things that make them different.

Being in a shelter is stressful for animals — but so is moving to a new environment after days, weeks, or even months of being in the shelter! The dogs the behavior team works with are often most sensitive to this change, and they may act out in response.

We put in a lot of hard work to do basic training with our long-timers, but those skills often need reinforcing upon placement into a home. Even dogs who we think are housebroken can have accidents in their new homes! Be prepared for a learning curve the first few months after bringing your dog home, especially if the adoption counselors mention a dog displays certain behaviors. They’re not going to automatically disappear; you have to put in the work to make it happen.

When I brought Dempsey home, he had a tendency toward mouthiness and overarousal. I had some long-term scratches and bruises while I trained him to self-calm and control his impulses, but it admittedly took longer than I thought it would. (He still needs a refresher course now and then.) But I didn’t give up, and the training we did together brought us closer in the end.

Animals are like children; they need your guidance and teaching to understand what is and isn’t appropriate, and they’ll often need to be told more than once. Don’t give up on them; just give them some more time. Remember that the Humane Society staff can always offer training advice and suggestions to make the adjustment easier!

Let me tell you about a friend of mine: Nufasi. He was the sweetest little chunk of a bully breed mix, and we went on several outreach adventures together. We even went to the movie theaters, where he got belly rubs and popcorn from every single person who stopped by.

But Nufasi waited months on end to be adopted. Why? He needed to be the only pet in the home.

If a dog is described as “single pet only,” it doesn’t mean they’re less worthy of a family. Some of the sweetest dogs I’ve met at the shelter prefer having the love all to themselves, and it’s so hard when they get passed up by potential adopters who don’t have pets yet, but are considering more in the future. So, “just in case,” they overlook these single-pet lovebugs.

But here’s the thing — there’s no guarantee a dog billed as “dog-friendly” will be that way forever, or will like every single dog they meet. On the other hand, some dogs deemed “single pets” may grow more confident in being around other animals  and they could potentially coexist with other animals later down the road. My dog, Dempsey, loved hanging out with doggie friends in his first few years with us. But, as he’s gotten older, he’s become less tolerant of other pets, enough that we now consider him a “single pet only.” Sure, we would have liked to be a two-dog household at some point, but keeping Dempsey happy and safe is our top priority.

Oh, and as for Nufasi: He found a wonderful family who was ready to spoil him like the only dog he deserved to be!

5. Animals need us to be their advocates.

While it sure would be cool if they could, animals can’t talk. They can’t tell us what they’re feeling or what they need, so it’s our job to interpret their body language and desires on their behalf. Take Dempsey, for example: If he’s being extremely ornery, I know he’s gone way too long without a walk. So, no matter what I’m doing, I lace up my shoes and head out the door with him.

The animals at the shelter are the same. Every one of them has different needs and will respond differently to different stimuli. The behavior team, adoption counselors, and volunteers do amazing jobs at deciphering those cues and meeting those animals’ needs. When you volunteer long enough, you start the recognize the difference between a “feed me” and “walk me” bark — and it’s the same thing when you’re a pet parent.

I’m so grateful for all the work that the Lawrence Humane Society does for our animal community — but there’s always so much more that can be done. Please consider donating, volunteering, or fostering to help well-deserving animals get the love and attention they need to thrive. 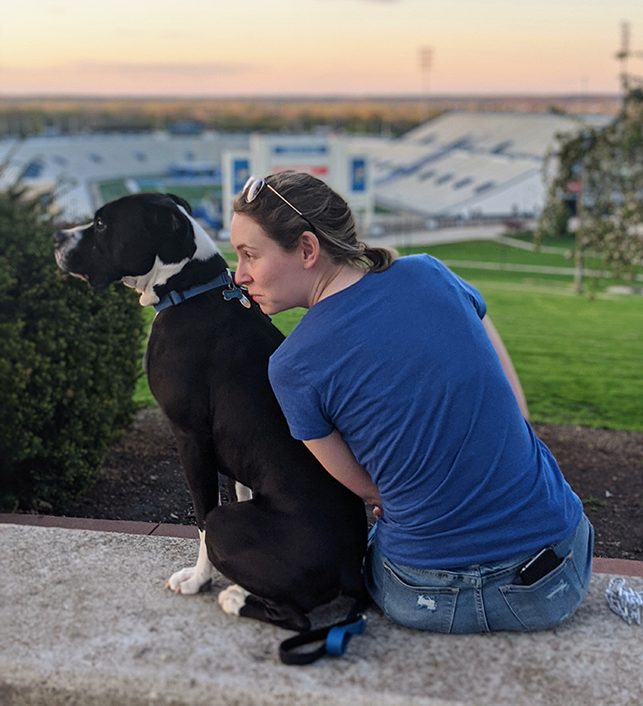 Kate Miller is a marketing manager/stay-at-home dog mom to a rambunctious rescue boxer named Dempsey. In their free time, the two of them (plus Dempsey’s dog dad) enjoy hiking, trying new treats, and long naps on the couch. Follow her on Twitter or connect on LinkedIn to see more of her work!

Want to write an article for the Wet Nose News?

Email your ideas to marketing @ lawrencehumane.org  and let’s chat about publishing your story on our website!