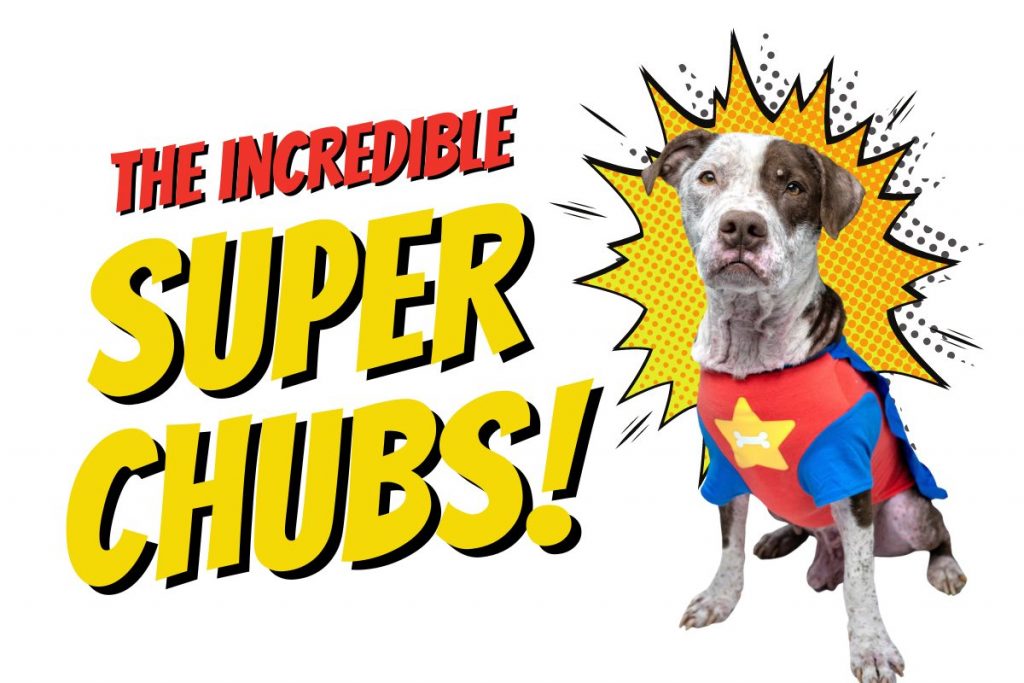 Chubs came to Lawrence Humane in June as a stray with a very severe skin conditions. His skin was inflamed, itchy, and bleeding from persistent scratching. He was anemic and significantly underweight. He was missing fur all over his body and his raw paw pads left bloody marks with every step. And yet, his tail never stopped wagging and the smile never left his face. Despite his never-ending discomfort, Chubs was kind to every person that he met and every dog he interacted with. His big heart and sweet disposition shone through!

Over the last four months, the Lawrence Humane staff have worked tirelessly to address Chubs’ skin conditions and get him some relief. We engaged the help of a pet dermatologist in Kansas City who was able to diagnose both of the conditions ailing Chubs – an antibiotic-resistant staph infection and an autoimmune disease. In partnership with the pet dermatologist, we created a medical plan for Chubs’ recovery and the dermatologist was able to get Chubs into a drug study for a new antibiotic with very favorable results – an incredible opportunity in order to address an otherwise antibiotic-resistant infection with no other options!

Chubs spent several months enduring weekly blood tests, daily oral antibiotics, and medicinal sprays, and during it all his good nature never waned and his inner light never dimmed. He accepted every poke and prod with a tail wag and a thankful grin, tongue hanging to the side and joy in his eyes! Finally, thanks to the drug study and the diligent care of the Lawrence Humane staff, Chubs recovered from the staph infection!

And while we continue address Chubs’s autoimmune disease and figure out the best long-term treatment plan so that he can one day become available for adoption, we continue to learn more about his superpowers! We’ve discovered that Chubs is able to run at the speed of light! He can hold up to three tennis balls in his mouth at one time! He can catch treats in mid-air! And his jubilant smile can melt the heart of any villain in under 5 seconds flat!
We couldn’t go the extra mile for animals like Chubs without loyal supporters like you. Will you be a superhero for Chubs and the other animals at Lawrence Humane?

The best superhero stories revolved around partnership – good forces coming together to vanquish evil – because we all know that we are stronger and better together. We are so thankful that you are our partners in the effort to vanquish the numerous obstacles that come in the way of incredible animals finding forever homes. Your support and partnership is what makes it possible for us to ensure that animals like Chubs have a happy forever.